Captain Hutton writes about his friends at the Bartitsu Club 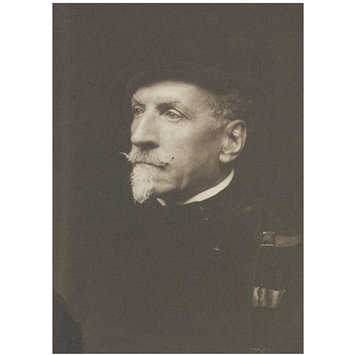 A portrait of Captain Alfred Hutton, taken at about the time he was teaching at the Bartitsu Club.

Captain Alfred Hutton was among the instructors who taught various branches of “antagonistics” at E.W. Barton-Wright’s School of Arms in London circa 1900.  One of England’s most prominent and respected swordsmen, Hutton was also the president of the Amateur Fencing Association and a pioneering practitioner of revived Elizabethan era fencing with weapons such as the rapier and dagger.

Although Hutton’s specialties do not appear to have been formally included as aspects of Bartitsu, it’s evident that there a good deal of cross-training took place at the Bartitsu Club; for a complete account, see Ancient Swordplay: the Revival of Elizabethan Fencing in Victorian London.

In an article for The Press newspaper (8 February 1904, Page 10), Captain Hutton reminisced about some colourful characters and incidents from his long experience of fencing.  He also offered the following remarks upon his Bartitsu Club colleagues and their methods of antagonistics:

“Before bringing my passing recollections to a close as regards people I have met, and as having been more especially connected with the use of defensive and offensive weapons, I should like to refer to my friend Monsieur Pierre Vigny, a Swiss gentleman, devoted to all athletic exercises, and certainly master of the art of self defence by means of an ordinary walking-stick, a Malacca cane being preferred.  The exercise is most useful in case of attack by footpads, most interesting as a sport, and most exhilarating in a game. It beats single-stick.  However, it would take far too long for me to give further explanations.

There is another new development of athleticism which I strongly advocate, viz., Ju-jitsu, or Japanese wrestling.  I am too old to go in for regular wrestling as it obtains in Japan, easy as it may look, but my good friends Uyenishi and Tani put me up to about eighty kata, or tricks, which even at my age may one day or another come in useful. In modified form the art might be advantageously practised by a small boy when meeting a great hulking bully; indeed, the successful way in which a twelve-year-old friend of mine who knew some tricks of Japanese wrestling floored his parent in my presence was most instructive in spite of its apparent disrespect.

My Japanese friends tell me it is one of the most amusing sights to watch the little native policemen in Japan throwing and capturing huge, stalwart, European sailors who have supped not wisely but too well.”

These anecdotes clearly demonstrate that Hutton took a keen practical interest in the classes offered by his fellow Bartitsu Club “professors”. He occasionally demonstrated the Vigny method of self defence with a walking stick during interviews, and he offered a somewhat more detailed account of the Vigny system in his book The Sword and the Centuries.  It was also in that book that he described the Bartitsu Club as being “the headquarters of ancient swordplay in England”.

As it turned out, Hutton did find use for some of the 80 “kata” he learned from Tani and Uyenishi, beginning when he penned a short monograph on Ju Jitsu, or Japanese Wrestling, for Schoolboys. A few years later, Hutton demonstrated a number of jujitsu “tricks” for a panel of doctors working in one of London’s psychiatric hospitals.  This was almost certainly the first time Asian martial arts had been applied towards the problem of humane self defence and restraint in a therapeutic environment.