Posted under: Armizare - The Knightly Arts

By the late Middle Ages, the Italian peninsula had become an ever-changing patchwork of petty kingdoms and free cities. Wars to gain, hold, and influence other cities put the peninsula in a state of nearly continuous, small-scale warfare, as political goals were carried out by force of arms. Dominating the field were the condottieri, mercenary knights who fought the despots’ wars, and had to be versed in a multitude of weapons including the sword, spear, and axe, in or out of armour, on foot or horseback, and against any number of opponents.  In the process, they developed a martial art of a richness and complexity to stand beside any other in the world.

Half a millennium later, the doorway to that martial art stands open to you.

FIORE DEI LIBERI, OUR TRADITION’S FOUNDER
Our medieval martial arts curriculum comes from the 14th century Italian master-at-arms, Fiore dei Liberi, son of a minor nobleman from Friuli in northeastern Italy, who has been called “the father of Italian martial arts”. A wandering swordsman, soldier and fencing master, after fifty years or study he composed a series of detailed, illustrated manuscripts, all entitled il Fior di Battaglia (the Flower of Battle).

Maestro Fiore gave no formal name to his school or his martial art, simply calling it Armizare (are-mee-TZAR-ay), which means “the art of arms”. He divided Armizare into three principle sections: close quarter combat, long weapon combat and mounted combat. Within these subsections, dei Liberi taught his art through a series of zoghi (“plays”) —formal, two-man drills akin to the kata of classical Japanese martial arts.

Scrimia (literally “fencing”, ie: “swordplay”) begins with the sword, but forms the technical, mechanical and tactical basis for fighting with all other long weapons in Armizare, such as the spear and poleaxe. The system also includes the use of several unusual weapons, such as monstrous, specialized swords for judicial combat, a slashing, winged-spear called a ghiavarina, and hollow-headed polehammers, filled with an acidic powder to blind the opponent! 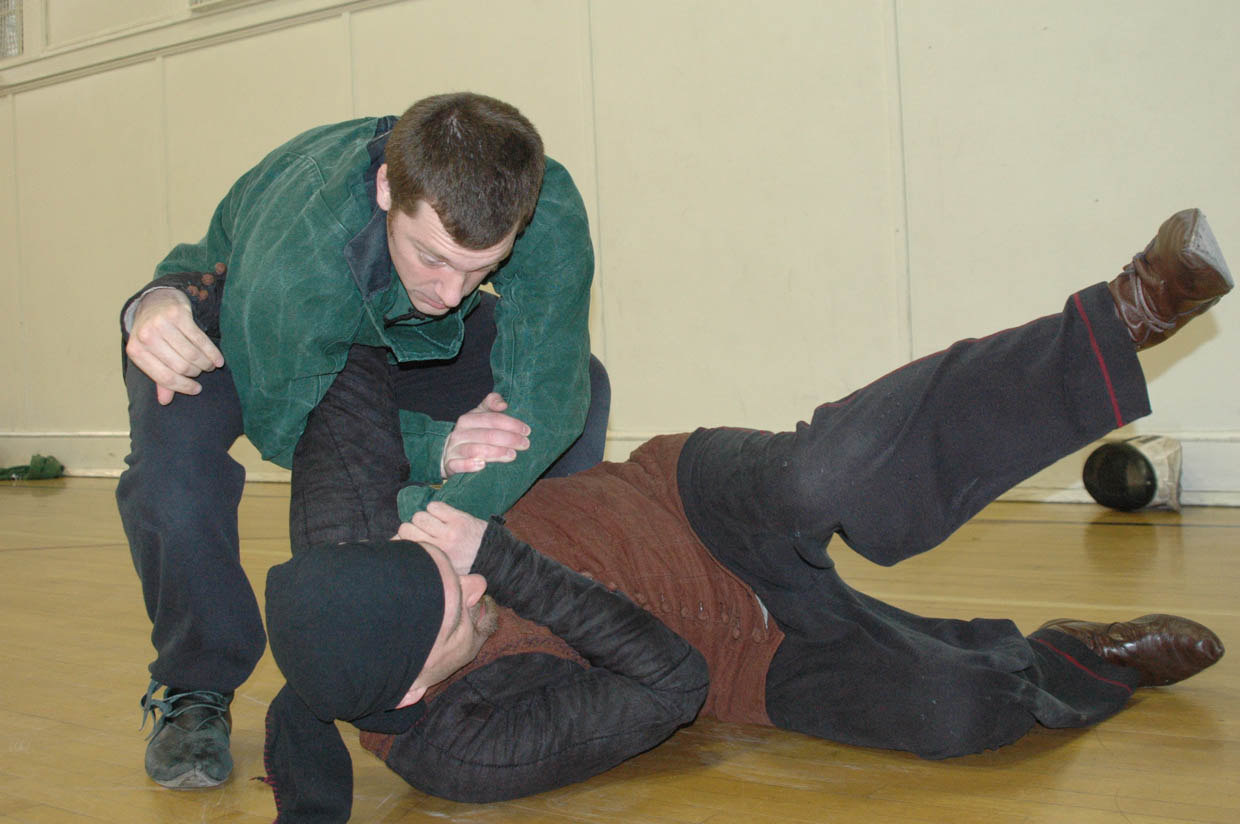 Abrazare (Italian for “embracing”) is the unarmed system contained within dei Liberi’s fighting art. The goal of the system is to get the opponent onto the ground as swiftly and effectively as possible without going there yourself. Much like classical jujutsu, the fundamental principles of abrazare include:

The medieval dagger was a large weapon, often the length of a man’s forearm, and designed for both self-defense, and as the call of last resort on the battlefield, where its sharp point could puncture the weak-points in armour. Dagger fighting and unarmed combat are closely intertwined in Armizare, and together form the basis of fighting with all other weapons, especially in armour.

It total, medieval close quarter combat is used in or out of armour and includes: 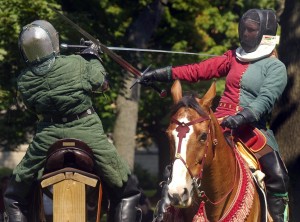 Finally, the knight was first and foremost a cavalryman, and his fighting art was equally adapted for combat on foot or horseback. While we currently do not practice mounted combat, the mounted techniques contain many interesting insights into the other sections of the art of arms:

IS THE ARMIZARE PROGRAM RIGHT FOR ME?

This program will especially appeal to you if you:

HOW DO I BEGIN?
Mastery is difficult, but beginning is easy! Just enroll in our Taste of the Knightly Arts introductory class and let your journey begin